Note it is NOT a government department.

It's just part of the fraudulent image incresingly presented by the 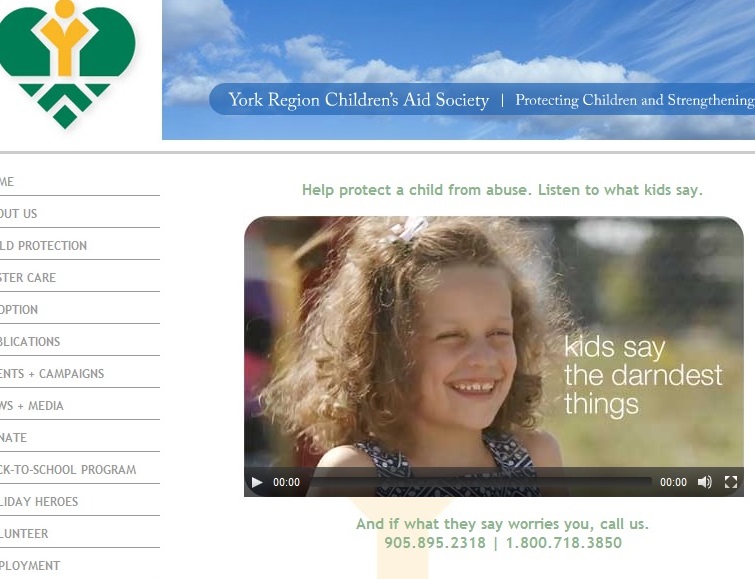 You can express your concerns to StopCasdotCA@gmail.com

The York Region Children's Aid Societ is one of the 48 Private Corporations who are part of the never ending abuse of children and families under the subterfuge of Child Protection.

Throughout Ontario, these Societies have been fabricating evidence, placing children at harm, and creating trails of destruction in the community.

This is just one of the 48 private corporations driven by One Billion Dollars of tax payers money in a disgraceful waste of money that is spent on the destruction of families by fabication of evidence, perjury and abuse of children and parents.

This "Agency" gains additional funds for creating work  for themselves such as unnecessary supervised access and virtually unlimited funds for litigating against the most disadvantaged in the community.

Note: The Family and Children’s Services of Frontenac, Lennox and Addington (aka Kingston CAS) directly employ hundreds of people and many more indirectly on contracts that can range from cleaners, teachers to occassional court filers. Most of these staff have no direct effect on Child Protection as it is called.

Rule 1. Never have any conversation with a CYC worker. Anything you say will most probably take priority in their notes and what they write could be what the Child Protection Worker or his or her supervisor "wants to see" to hide their own dirty deeds.

This CAS operates over a very large area.

That means many parent are unable to visit their children, legal air resources are space and in the courts where they operate, the judges treat CAS authority.

The problem is, across Ontario, Child Protection Workers are notorious for Fabricating Evidence and intentionally placing children at a risk of harm.

www.StopCas.ca is recieving numerous complaints regarding fabrication of evidence regarding Child Protection Workers of the Algoma CAS.This is not unusal however what is distrubing about Algoma is that they are apprending children without any apparent reason other than because the parents are on welfare.

If you have just been served with court documents please scan a copy and send it to StopCASdotCA@gmail.com

If we spot something that stands out to us, we will let you know.  Remember, its your responsibility to go over the CAS documents and look for misleading and or false information. We specifically look for the tell tale signs of fabrication that become very repetative when reading CAS affidavits.

All documents received are kept confidential, and will never be published by us. We do NOT break publicity bans. We leave that to the CAS.

If you are reading this page, odds are you in a remote area of Ontario. Odds are that there a large number of other parents who have  had children apprehended by the CAS. Make sure network in the community, and compare notes with  other victims of York Region CAS.

York Region CAS like the other 48 Private Corporations MUST apprehend children and keep them as long as possible for "funding" that runs towards 100  Million Dollars a year.

That means they will generally want to "conquer and devide".

The First Task of a Child Protection Worker is to tell a mother that she "must separate" even when he is a loving devoted father and husband.

The Second Task of a Child Protection Worker is to force the mother to obtain a restraining order. Don't fall for it unless there is a "real" need and you have received legal advice to do so.

York CAS Child Protection Workers like any in Ontario try to "build evidence" and use their "friends" to "help them". Your counselling becomes a liability and of no help if you have to worry about your words being twisted against you which you can expect to happen if you sign a consent.

CAS Lawyers LIE, CAS Child Protection Workes LIE, in affidavits and especially in court.heaIf a CAS lawyer lies  in court insist your lawyer order transcripts. Transcripts are also frequently wrong. They may a friend of the CAS or it could be what the reporter wanted to hear. Never ever assume transcripts are correct unless you hear a recording of the audio which is extremely difficult to obtain officially.

Lawyers can order a CD and clients normally cannot not but its not impossible.

If CAS FABRICATE Demand that your lawyer APPEAL THE ORDER

If you do NOT appeal each and every order, the CAS will repeat the false findings.

CPW's lie. NEVER EVER advise a Child Protection Worker or a lawyer or anyone, that you have or intend to record them on video or sound.

IF you tell them that you have recorded or MIGHT record them, they will seek comprehensive court orders preventing you from recording them.

If you get hit with such a requested order,  your lawyer to fight it as generally, they have not a shred of evidence to justify request.

If you have recorded, make sure you immediately place the file in a safe place "on the cloud" where you can get it later. CAS have previously used Police to obtain tumped up search warrents to "seize computers" etc in order to take take evid ence out of CAS clients. These warrents are often made out for other excuses that can include serious defamatory allegations.

Child Protection Workers and lawyers are notorious for fabricating "admissions". Be very careful when answering questions.

CPW's ask leading questions, or trick questions that are looking for, probably as standard procedure or more likely, on instructions from their "Supervisor".

Allways ask for a card of the worker and ask the name of the Supervisor.

90% of the time, the CAS have NO GROUNDS to ask for an assessment.

90% of the time, an "assessment" is used to create evidence by a CAS Quack, a hired gun who does nothing but write assessments for CAS.

Most assessments have a good chance of being made to order.

CAS provide selective notes and opinions that a quack often turns out a 20,000 word work of fiction to suit the CAS.

These assessments are genearally very bad news and full of contradictions that are tpical of habitual fabricators of evidence.

If you know of lawyers who you can reccomend for CAS matters in the Kingston CAS district email StopCASdotca@Gmail.com

Working for a Cult like criminal organization can be tough. The staff at the The Family and Children’s Services of Frontenac, Lennox and Addington (aka Kingston CAS) constantly change. Anyone they don't like gets the boot or leaves.

If you meet  a former CAS employee, have some empathy for what they have to go though.

If you have to meet anyone from the CAS, make sure you ask the worker for their card, please scan the card in jpg and send us a copy StopCASdotCA@gmail.com .